The Irish Craft Beer Show visited the Alltech Craft Brews and Food Festival 2018 from the 8th to the 10th of March.

John "the Beer Nut" Duffy spoke with festival newcomers and we also watched the announcement of Dublin Beer Cup winners.

Listen to the episode here (audio version to follow).


For information on BrewCon 2018, check out http://www.nhcconference.com/

For the Chop and Brew review of BrewCon 2016 go to the video here: https://youtu.be/KYQl0y16DLU

To join the National Homebrew Club or take part in the discussion forums go here: http://www.nationalhomebrewclub.ie/

Thanks to all the BrewCon 2017 committee for their hard work. It was much appreciated by all.
Posted by Brian Condron - ICB Show at 4:57 AM No comments:

Following his quick trip to Minnesota for Homebrew Con 2017 (www.homebrewcon.org), Brian shares some of the beers he brought back with John Duffy, "The Beer Nut" (https://thebeernut.blogspot.ie/).

APOLOGIES FOR THE SOUND QUALITY!

Thanks to Elsa and Chip of Chop and Brew (http://chopandbrew.com/) for providing the beers.

Listen to the audio version of the show here: Episode 28

The beers we sampled were:

I recorded some footage from this and will try and pull and episode of the ICB Show together in due course, but while it was still recent I just wanted to post a quick* review of my trip to Homebrew Con in Minneapolis last week (15th – 17th June). Short summary, I enjoyed every minute of it! I was invited by Chip Walton to take part in a panel discussion entitled “Homebrew Worldwide: An International Panel”, to give the Irish perspective on homebrewing. Imposter syndrome was in full force, but I jumped at the chance. The American Homebrewers Association covered my conference registration as I was speaking, and Chip organised a hotel roommate for me to share costs, so all I had to do was get to Minneapolis on time! It was one of those things that I always wanted to attend and I’ll forever be thankful for the opportunity.


I flew out Wednesday the 14th, with a short stopover in the craft beer desert that is Amsterdam Schiphol (so much green branding). Upon arrival in MSP and after clearing CBP, Chip’s wife Elsa whisked me straight away to Insight Brewing in St. Paul, where the Chop and Brü Prefunk Party was already well underway. This was a party and homebrew meet organised by Chip and Marshall Schott of Brülosophy. I sampled some of the Insight beers in the taproom where the main party was taking place, but for me the highlight was the homebrew meetup which took place in the brewery. There are some talented brewers over there, and for me some standout sours and meads. 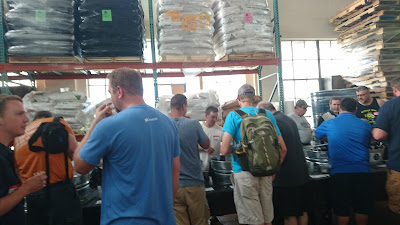 The next day was the beginning of Homebrew Con proper. Our hotel was only 500m from the convention centre which would be useful, as I realised right at registration that I’d left my passport behind. No beer in the USA without ID! After registering I picked up the goodie bag which included the usual things like hops, vouchers for malt, yeast and some stickers. Also given out at registration was Whalezbrah, the commemorative beer brewed by Surly brewing for the conference and a bottle of mead. I began to notice that mead is a big thing in Minneapolis!
I knew the conference would be big but the scale of the place still surprised me. The main Expo took place in a hall about twice the size of the hall where Alltech takes place in Convention Centre Dublin. This hall was where all the exhibitors presented their wares, there were stands from the likes of Yakima Valley Hops, White Labs Yeast and Weyermans Malt with plenty of free samples. Lots of bars dotted around too, with local breweries Summit, Surly and August Schell, and other breweries like Ballast Point, Sam Adams and Bells pouring as much beer as we could fit into the 100ml sample glass. BSG Handcraft, the American distributor for MCI malt amongst others, had a bar manned by Jake Keeler and Michael Dawson formerly of Brewing TV fame. They served beer from breweries and homebrewers that used their ingredients, a good place to hang out if you wanted some good beer. I took my first wander around the Expo hall with Don Osborn of YouTube fame (https://www.youtube.com/donosborn/) and that’s when I noticed the amount of familiar faces around. Who’s that manning the BeerSmith stand oh that’s Brad Smith. Hey look at all the shiny from Blichmann engineering and hey that’s John Blichmann selling it. There’s Jamil Zainasheff signing his book, there’s the entire team from Brewing Network (Tasty remembered me, friends made at BrewCon are friends for life!). We bumped into James Spencer from Basic Brewing, the amount of brewing knowledge in this one room was incredible and all you had to do was stick your hand out and introduce yourself and you could share in it. 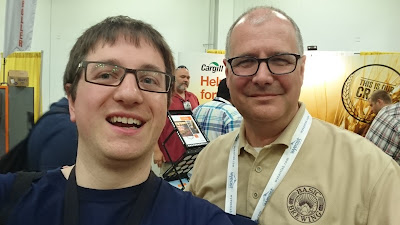 Some interesting products demonstrated included Cryo hops for from YCH hops, already on sale in the Irish market from Get ‘Er Brewed (http://www.geterbrewed.ie/hops/?features_hash=2-115) and the All American home can seamer (canned homebrew, the future is now). I got up close and personal with the shiny from SS Brewtech and now it’s not a matter of if I spring for a Brew Bucket, it’s when. Or maybe a chronical… 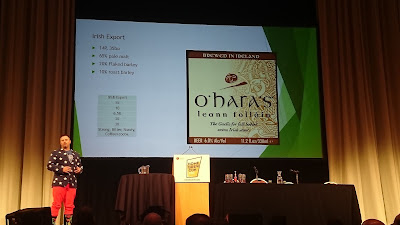 Moving on to the seminars, unlike Brew Con there were 6 talks happening simultaneously in different rooms in the convention centre, so you had to choose what to go and see. One personal highlight for me was “Hold my beer and watch me Science!” from Marshall Schott and Malcom Frazer of Brulosophy with Denny Conn and Drew Beechum of Experimental Brewing. Another was Kris England’s history of stouts and porters “Kinda brown, mostly sexy”, seriously we have to get this guy over for BrewCon. There was talks on every brewing topic under the sun, Czech lager styles, meads (they do love them in Minnesota), milds, Berlinner Weiss, identifying off flavours, even keeping your beer lines clean! The seminars were all recorded and will be available for AHA members to view at a later date, I look forward to going back and watching some that I missed, and reliving some I attended.

The seminars and expos were all finished by 5 which allowed us to venture into Minneapolis. I wanted some good American food and was not disappointed! 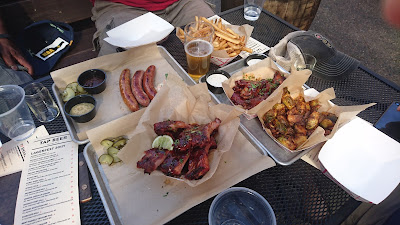 Each evening at 7:30pm there was a party in another exhibition hall, the same size as the one the expo was in. On the first night the kickoff party featured breweries from all over Minnesota and surrounding states, I unfortunately had to miss this one due to severe jet lag. But Friday evening was the highlight, Club Night featuring beers from almost 50 different homebrew clubs! Themed bars and costumes were the name of the game, speaking of names these guys put a little more effort into naming their clubs than we do. Brew Tang Clan anyone? I even found the American cousins of one of our beer blogger national treasures, the Cedar Rapids Beer Nuts (John assures me copyright lawyers are already on it). I circled the room with the aim of going as long as possible without trying the same beer style twice, not that difficult a task. Key lime mead anyone? Entertainment was provided by rock musician Abstract Artimus, and an inflatable velociraptor! 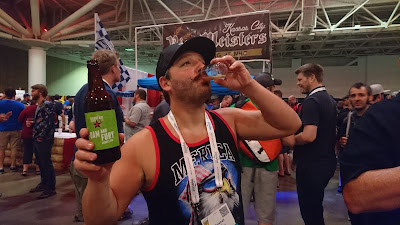 On the final day as the expo wound down, the winners of the National Homebrew Competition were announced. I skipped this (surely couldn’t be up to the standard of Alfie Byrne’s) and caught up on some seminars repeated from earlier in the festival. The conference wrapped up with the knockout party, where all the unopened bottles from the competition were shared out. Labelled with nothing but the style number it was a mystery what beer you’d get unless you were a BJCP grand master. The smug face on Gordon Strong! 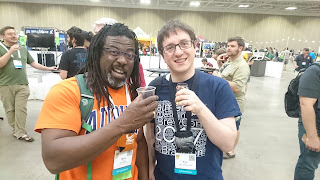 That was Homebrew Con, despite the jet lag I loved every minute of it. 2,586 attendees in total, slightly bigger than BrewCon and an experience I’ll remember for life. Glad it wasn’t 2,585.

So Homebrew Con 2018 anyone? 28th – 30th June in Portland, Oregon. Anyone who can make it work but is on the fence, I heavily recommend it. Flights to Portland should be around €650 return with one stopover and you could get a hotel for 3 nights for about €400 (half that if you share). Not that I’m already pricing the trip or anything… 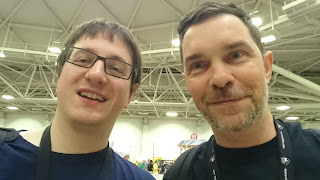 Thanks to everyone who I hung out or chatted with with over the few days, Elsa and Chip, Gaston my roommate, Bryon Adams, Don O, Paul and Denise Fowler, Leif, Joel, Chino and Daniel. Apologies to anyone I left out. You all made me feel welcome.

The brewers we spoke with are:

Tony from the Lough Gill Brewery in  Sligo:
http://loughgillbrewery.com/

Jeanne from my local brewery, Hope Beer in Kilbarrack
http://hopebeer.ie/

Don and Joan from Clonakilty Brewing Co. in, well you can guess..:
http://clonakiltybrew.ie/

And finally, Dara from the Station Works in Newry:
http://stationworksbrewery.com/
Posted by Brian Condron - ICB Show at 3:09 PM No comments:

After the birth of my daughter I thought my brewing days were over, no way could I spend all day Saturday on an all grain batch. Then I discovered the Grainfather, an all in one electric brew in the bag system, and the promise of the four hour brewday! Join me as I take you through batch #3 with the grainfather as I brew an Irish Stout to have on tap for St. Patrick's Day.

As this episode was quite visual I decided to not release an audio version of this episode.

For more info on The Grainfather check out:
www.grainfather.com

At the Alltech Craft Brews and Food Fair 2017, John "The Beer Nut" Duffy caught up with Scott Baigent of Eight Degrees Brewing.